Home / Questions / Can You Win Real Money On Slotomania?

Can You Win Real Money On Slotomania? 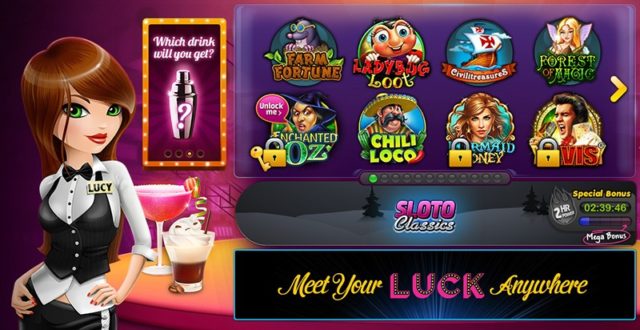 Despite being the most popular social casino game of all time, plenty of questions surround Slotomania. Ever since it launched in 2010, Slotomania used its compatibility with Facebook to take the social media platform by storm. This was the first pokies game that was streamlined for Facebook, which was a visionary move by Playtika. Utilizing fun themes and fake coins, Slotomania instantly became a social media sensation. Today it boasts 100 million downloads, which makes it the most popular pokies app in both app stores.

Even 10 years after its release, Slotomania still boasts a community of 14 million players on Facebook. This impressive relevance showcases how innovative this game was. By providing quality games & free coins, Playtika created a library of pokies themes that anyone can enjoy. Despite being the most revered pokies app of all time, many punters ask the same questions. We are routinely bombarded with requests asking if Slotomania pays out real money. Unfortunately, there’s no way to win real money on Slotomania. While you can purchase more coins with real money, there’s no way to cash them out.

Cannot win real money but can save

However, just because Slotomania doesn’t payout doesn’t mean there aren’t ways to save money while playing. From strategic purchases to obscure offers, punters have multiple options to curb their spending while playing Slotomania. Knowing a few tips goes a long way since it saves unnecessary in-app purchases. For this reason, we compiled a list of Slotomania tips that help users save money. Utilizing these approaches make the game even more enjoyable, so quit wasting money and start playing like a pro!

Top ways to save money on Slotomania

Tip #3: Avoid Scams – Many sites offer free coins & guaranteed Slotomania cheats, but none of them are legitimate. These nefarious operations are only after your personal information, so avoid them at all costs. Through fancy ads & click inserted cookies, these sites make sure customers lose more than just the money from their purchase. Slotomania works off their own server, which means no cheat or foreign free coins are tolerated by their system. Plenty of users have had their identities stolen by fake sites, so don’t ruin your finances for free coins!

Tip #2: Bet Big – The only way to unlock new machines is by paying or leveling up. To speed up the process, bet big to advance through levels. This can be done on private sessions or through live tournaments. The winners of Slotomania’s competitions receive free coins, which creates an interesting way to level up. These tournaments are free to play & the winners are selected by how many coins they spend. To level up strategically, save up as many credits as possible and bet big during tournaments!

Tip #1: Hit the Lotto Bonus – Out of all the ways to get free coins on Slotomania, the most reliable method is the Special Bonus. This is the free pack of coins that’s available every few hours. While this is a slow way to accumulate coins, there’s one hidden perk to using it frequently. Users that check in daily for several days in a row are awarded a Lotto Bonus. Depending on the frequency of how many times you checked it, this can be worth thousands of coins. Take advantage of this hack by checking into the app every chance you can!

This is an amazing case of try-before-you-buy! If you happen to be a newbie to online slot machines, you’ll want to try out the games first before you start playing with real money. Actually, most people play free pokies, about 100 times more than the real money ones. And when some people are satisfied with that, they don’t need real money gambling to have fun, and that’s what has made the Facebook app is so popular.

Let’s find out how the whole shebang works before you get involved in it. You must have heard of wilds, multipliers, and all those free spins, but they’re easier to comprehend when you see them in action.

The fact is you can play (Slotomania or other) pokies and win real money without actually putting in any money, to begin with! Yes, you read that right, real money gambling doesn’t have to start with real money. Not when no deposit bonuses exist!

The most popular pokies will have the option of free funds from the casino that you have to play through. Once you follow this, you can take out the winnings. Usually, real money casinos will offer this for many games, especially when you sign up. So, if you want to play pokies for real and win some real money online, take the benefit of those “free money” bonuses if you have the chance.

So, this is the difference between a free and real pokies machine?

Now when it comes to does Slotomania pays real money – the answer is “no,”!

There is no way you can win real money by playing on Slotomania. It is a freemium and simulated gambling game, where you wager virtual currency instead of actual real-life, cold, hard cash. However, you will be paying actual money to purchase the virtual currency that you can wager there to play for a long time. What you can do is find an actual online casino that will let you play for real money.

1. How to win real money on Slotomania?

If you want to win real money, you’re barking up the wrong tree! Slotomania is introduced for fun to get a safe rush; no real money is involved. If you want to test out your pokies skills, this is the perfect place for it, but it is not real money online casino site.

2. How to get real money on Slotomania?

You can’t get any real money no matter how much you win on their pokies, because it’s not an online casino. Of course, you can spend money on it if you want to unlock bonus features faster and can also avoid wasting or spending money on many unwanted things, as mentioned above. So, be careful not to spend too much money on a game that will not pay you back.

3. How to play Slotomania for real money?

Never! Slotomania is not a real money site/app and should not be played with this intention. You can make in-app purchases so that might confuse some people into thinking you can play for real money. Yes, you can use your money to play the game, but you can’t claim your winnings, unfortunately.

4. How to get Slotomania coins into real money?

Currently, neither of these things is possible. Moreover, Slotomania has no plans to become a real online casino at this time. It probably never will. Its intended goal is to offer entertainment and fun spokies for the masses to play for free. Have fun and practice, but let go of the idea that you can turn those virtual coins into real money.

Yes, Slotomania is legit, but you need to know what you’re into before you join. Slotomania is a social casino, and its software is for “entertainment only.” There are no real money rewards involved. Although you can use your own money to buy credits, the rewards from games are not monetary. Just like freemium games where you don’t earn anything outside the game. Although, they leave this information almost intentionally unclear, and people who automatically assume playing pokies is a money-bearing activity may fall prey to it.

6. How old is Slotomania?

It was first introduced in December 2010. So, they are currently ten years old and have grown since then. Now, they have a website entirely dedicated to Slotomania users, and they also have a mobile app. It has over 13 million likes on its official Facebook page, and you can access a treasure of pokies games via its application.

It is owned by Playtika a software company from Herzliya, Israel which introduced Slotomania back in 2010. Caesars Interactive Entertainment acquired the social casino platform from Playtika, but left the running of Slotomania in the hands of the Israeli firm.

8. What is the Slotomania app?

Slotomania is an app with a wide collection of various video pokies games. When you sign up, you’ll receive free coins, but afterward, you need to either progress or buy your own for real money. This app represents a social casino platform, stating that playing pokies have an entertainment value only — you won’t be making any real money in return. As you play continuously, you will receive points and keep leveling up. The higher your level, the greater the number of games you’ll be available to play on.