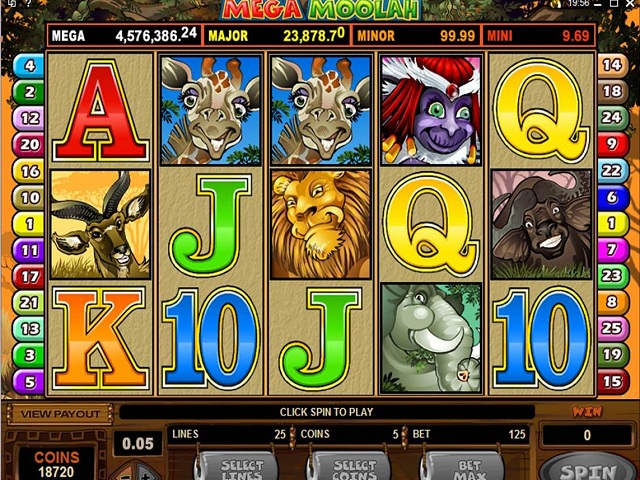 Asking for Mega Moolah? Who doesn’t want to play it! Mega Moolah online Pokies is a 5 reels, 25 pay-lines pokies game, with one of the biggest progressive jackpots in the industry. This online pokies is the biggest dream of every online pokies player is to win that one ultimate jackpot that will change his life forever, or even make him a millionaire with just one spin. That is the reason it is called a “Progressive”.

Mega Moolah Progressive is a game developed by Microgaming. It is one of the best and most popular online pokies starting a new era in offering games with big jackpots and or with multiple jackpot bonuses.

With the coming of this game came a turning point in the casino games industry where a new way of winning the ultimate prize to the progressive pokies was introduced. Mega Moolah stands in the top three most rewarding pokies of all time, with tens of millions of dollars in prizes, averaging its highest jackpot at well over 1.5 million dollars.

Mega Moolah – Play at the Casino

Mega Moolah is much sought casino pokies game and is available in almost all casinos for you to enjoy and play. It is not only the potential jackpot that attracts the players but also its interesting African wilderness theme that offers some great looking wild animals as main characters. It has a cartoonish design and all characters look kind of goofy and funny, which makes this game a real joy to play.

This pokies game play has that old school feel, with a pretty straightforward approach that does not have any flashy features that will take your mind off from the main goal of winning the jackpot. You can enjoy this game in any reputed casino of your choice and play online even with your mobile devices.

As said earlier Mega Moolah is a 5 reels, 25 pay-lines pokies game, with one of the biggest progressive jackpots in the industry. Betting range is the main reason Mega Moolah is so popular in the gambling community, because there is no other game in the world that gives you a chance to win such huge prizes with so little investment.

Coin sizes go from 0.01 up to 0.05. You have 25 lines to bet on, and a maximum of 5 coins per line, which means that this game can be played for as low as 0.01 up to only 6.25 per spin.  Thus everyone can afford the chance to win the ultimate prize, and you does not even have to play minimum stake.

This affordable chance to win huge affected the games RTP percentages, so Mega Moolah has it set at only 88.12%, which means that you will not hit winning combinations nearly as much as you would in other games, but progressive feature is triggered randomly so it is not influenced by the games RTP.

There are four different jackpots you can win – Mini that starts at $10, Minor – starts at $100, Major – starts at $10.000 and Mega progressive jackpot which starts at $1.000.000 and it is currently set at 2.45 million. Other prizes in the game are not that big, and the biggest payout you can win in a regular game is $11.250, but this is also quite rewarding considering the maximum stake.

Scatter is the Purple Monkey symbol. It will reward an additional prize of up to x100 your bet, depending on how many you hit on the reels. When you hit three or more anywhere on the reels, you will start a Free spins feature that will give you 15 spins, with all the winning combination prizes tripled. The feature can be retriggered whenever you hit three more scatters during the feature.

The best part of the Mega Moolah pokies is the progressive jackpot bonus game. It is triggered randomly, but the higher you bet, the bigger your chance is to trigger it. Once the feature starts you will be taken to another screen, where you get to play the classic Wheel of fortune game.

The wheel has four different types of fields, all with different colors and animal footprints, and all connected to a different jackpot. Red is for Mini, orange for Minor, yellow for Major and the only white field on the wheel will bring you the ultimate prize of the game – Mega progressive jackpot.