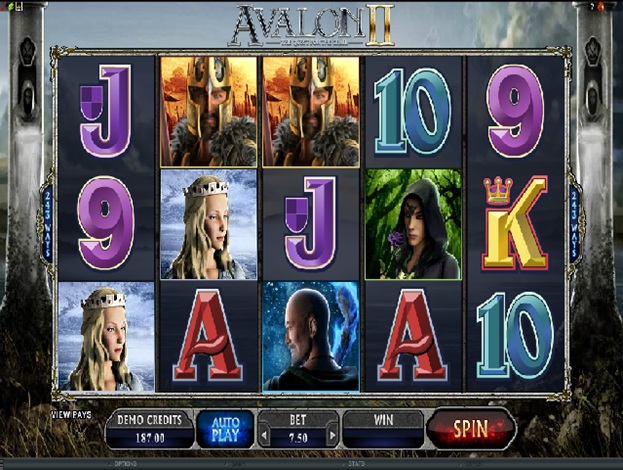 Avalon pokies is one of the most popular pokies liked by all the casino players. After the popularity of it Microgaming released Avalon II and continued with the Arthurian legend theme liked by all.

Avalon II takes us to another great adventure, on the quest for Holy Grail and offers you 243 different way to win, with 8 different bonus games and much more. With cool characters, a great soundtrack and non-stop action, Avalon II is the one 5 reel pokies game that all look for at the casinos.

The mythology of King Arthur and the Knights of the Round Table takes players on an epic quest to retrieve the Holy Grail. Merlin, King Arthur, Guinevere, the treacherous Morgan Le Fay and other legendary characters appear as symbols on the reels crafted in 3D. 3D animations and impressive background music enhance the mystical mythical theme. The impressive graphics, eight unique bonus features and a top jackpot that comes in at a huge 9,720,000 credits gives a superb gaming experience to all. Playing Avalon II with your smartphones and mobiles will make more wonders to the super hit graphics of the game.

Avalon II – Play at the casinos

Avalon II pokies game is found in almost all the trusted online casinos of the world. The pokies is a 243 ways to win format that is loved at Australian online casinos.  You can play all ways on Avalon II for as little as 30 cents per spin or as much as $7.50. Minimum bet for all ways is 30 credits and you can choose to bet up to 5 credits per way. Credit size options are 1c, 2c and 5c.

The wild symbol works in two ways in this pokies game. It works as a standard wild symbol, substituting for other symbols to create wins, and it also works using the Microgaming patented Trailing Wilds system. So the wild symbol is an important part of the gameplay for the Avalon II online pokies game.

The scatter symbol is incredibly important within the gameplay features of the Avalon II It is the scatter symbol that triggers the 8 level bonus feature. This feature is triggered by spinning in 3 or more scatter symbols whilst playing Avalon II, and this is a major gameplay mechanic that shapes the entire game.

The highlight of Avalon II is the Grail Bonus. It consists of eight different exciting games that are played in sequence each time the bonus is triggered by the scatter Grail symbols.

They take players on the mission to retrieve the Grail. In the Lake of Legend feature you have to re-forge the Excalibur by rolling dice and will win multiples of the total bet, depending on your success.

In the Misty Value feature you choose an extra wild and will receive 15 free spins. Your chosen wild symbol will double the payouts.

The Whispering Woods Bonus feature asks you to pick a shield and rewards you with a multiplier up to 160 times.

The Forest Falls feature awards 20 free spins. In this feature the Avalon II symbol is the Trailing Wild.

In the Dusky Moors feature you have to reveal two matching helms to win a multiplier up to 20x.

In the Hall of Shadows Bonus feature you take on the Black Knight, win cash awards and hopefully retrieve the Grail. Finally, you reach the Isle of Avalon feature to win bonus multipliers.

The freebies are not limited to the bonus games. Merlin can appear randomly in the base game to enhance a win with a magical multiplier of up to 4x. Or, if you have been unlucky and are without any payout, Merlin can give you a cash award of up to 20x your total stake.