Home / Questions / Which are the five best new year pokies machines to play with real money?

Which are the five best new year pokies machines to play with real money? 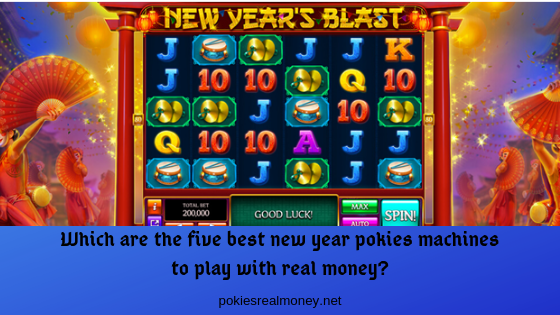 New year is around and as you are busy buying gifts for your family and friends and preparing for a fantastic Christmas break, here is answer to one of the questions we received from a punter. There are many new year pokies machines released each year and here find the five best new year pokies machines to play with real money.  You can join any online casino of your choice to play these pokies and use your own currency that is AUD or play with Bitcoins and have fun.

Happy New Year is a video pokies game by Microgaming that focuses on the traditional Chinese New Year celebrations where you get ready for fireworks and plenty of fun, not to mention big wins and luck for the entire year to come.The basic rules of Happy New Year are the same as in most standard pokies games, and the gameplay gives enough opportunities for players to happily customize each of their spin.

The game matrix contains 3 reels and 5 paylines in total, and all you need to do is make sure that winning combinations of symbols land on these paylines, as advertised in the paytable on the right-hand side of the screen. Click on the buttons in the command bar below the reels in order to adjust your wager and activate as many paylines as you want.

Most of the symbols available are exploding fireworks. They come in either yellow, red or green, and you need to combine them to win up to 80 times your wager. Combinations of mixed fireworks also trigger a small cash prize. The paper lantern symbol tops the list of basic symbols. With a reward equivalent to 160 times your initial bet, you probably do not want to miss out on this icon.

The secret reel symbol of Happy New Year is the game logo, four Chinese ideograms arranged in a square meaning “Happy New Year”. This symbol has two distinct functions. First of all, the logo serves as a wild card in Happy New Year. This means that you can use it instead of any other symbol and still score a cash prize. A welcome joker card that can prove quite rewarding during the game. Logo combinations are also, and by far, the most valuable of the entire game. Their value depends on the payline on which they land, and can vary from 1000 to 2400 times the value of your wager. Lining up three logos can literally turn the entire game around and make you considerably richer in a second.

This 5-reels pokies machine is going to lift your spirits in such a way that Santa might not be needed at all. Hosting some fine cash prizes and several mini levels to get involved with, it looks like you’ve got all the festivities you could ever have hoped for, and this one gives all year round. The location of this pokies machine is out on a frozen lake, a decorated town twinkling in the distance as you create small lines in the ice as you make you way back and forth. It’s a stunning fictitious setting, and one that warms the heart, even despite all that snow.

Baubles on either side of the matrix illustrate the number of active paylines to help guide your way to the money. Some of the baubles have been left blank, while others are numbered, the numbered ones can be hovered over, with the win line showing up across the grid to help you out if you’re stuck. You will find the Scandinavian blonde haired woman being one of the bonus icons; land between three and five of her and a mini level will appear.

A Santa of white and blue is on one side of the screen, while beautiful snow covered angel is on the other. There’s also a large Christmas tree lined with several sacks of presents underneath it that need to be opened later on during New Year, which again gives you a chance to keep totting up your prize fund. Not bad considering the highest paying tile on the paytable awards you 1,500 credits, which for a total bet of 9 isn’t that bad at all.

This pokies machine was presented by developers of Microgaming. Wishing happy holidays directly in the title of the game, they offer the system that allows forming combinations without taking into account lines. There are 243 ways of their formation on adjacent reels. During free spins, the number of potential chains rises up to 1,024. The video pokies also pleases customers with the presence of special pictures, a wide betting range, nice images on the screen, and bonus rounds, in which anyone can get a quite high bonus payout.

Aside from the main game symbols, there are the usual wild and scatter symbols to look out for, which have become as traditional in Microgaming titles as dry turkey, awful sprouts and being given socks as a gift have become to Christmas. The Happy Holidays logo is the wild, and this will substitute for all other symbols (apart from the scatter) to create winning lines that otherwise would not be on your reels. The Bauble symbol is the scatter, and not only do they look great on the Christmas tree but they also create plenty of rewards in Happy Holidays too. Three, four or five of the Bauble scatter symbol will trigger the free spins round, and this arms players with 10 freebies to enjoy.

The free spins round is played on a new set of reels, which are expanded to allow for 1,024 winning lines to be introduced. Each of your free spins will be played in the same way as the main game, with players looking to spin three or more matching symbols. Keep a look out for the Snowman symbol, because this cheeky chappy unlocks plenty of lucrative rewards. He will transform into any of the other high value symbols to help create or enhance winning combinations, and while the free spins round cannot be re-triggered, the appearance of the Snowman is sure to brighten up your day.

There is another special bonus round in Happy Holidays to enjoy. The Frosty Feature is triggered at random by any non-winning spin, because Christmas is a time for everybody to enjoy some riches. You can trigger the free spins round from within the Frosty Feature with just a single scatter too. This feature creates superb random wins, where each symbol is awarded a prize sum that is then accumulated.

Lucky New Year, is another Chinese-themed pokies from Pragmatic Play. It’s a 5 reel, 25 payline game that comes with free spins where the middle 3 reels are dominated by colossal 3×3 symbols. There’s also a streak re-spin feature that offers a chance to land a jackpot as well as plenty of cash prizes. Join the festivities from between 25p and $125 per spin.

There’s a traditional feel to the design in Lucky New Year – the reels are set within a pagoda building and include Chinese style A to J characters alongside oranges, drums and firecrackers. The dragon is the top payer, awarding 1, 10 or 20 times your total stake if you land 3, 4 or 5 on a payline. The golden dog is the wild. It can land on all 5 reels and substitute for everything bar the scatter. Land 5 on a payline and you’ll pocket a 20 times stake award.

The golden money tree is the scatter – land it on reels 1, 3 and 5 on the same spin to trigger the Free Spins feature. You’ll then be awarded 5 free spins. Look out here for the 3×3 colossal symbols which spin on the middle 3 reels throughout the free spins. Landing 3 scatters will get you another 5 free spins – there are no limits to how many more free spins you can play with.

You’ll also see lantern symbols that carry a money value with them – land 6 or more of these on the same spin and you’ll activate the Money Respin feature. The money symbols are held and the reels spin again 3 times, this time only showing blanks or money symbols. Every time a money symbol lands, the respins reset to 3. Keep on spinning until you run out of respins. All of the money values are then added together and that’s the prize you’ll win.

If you’re lucky enough to fill all 15 positions with money symbols, you’ll not only win all the accumulated cash prizes but also the Grand Jackpot prize – this is a fixed jackpot of 1,000 times your total stake.

Experts of Novomatic used with good effect a line from the most popular Christmas song Jingle Bells in the title. They manufactured a very colorful model that perfectly conveyed the festive atmosphere. There are also bonus features that may be involved in any unprofitable spin. Jingle Jackpot also provides the progressive jackpot.

It’s a 5 reel, 10 payline game from Novomatic that also comes with a Christmas Cracker bonus that awards a selection box of goodies including nudges, scatter-style payouts and a moving matching symbol that guarantees a win. Pay a little extra and you can add wild multipliers of up to 10x into the mix too. Bet between 40p and $50 per spin. The visuals in Jingle Jackpot have a real seasonal feel – backed by a tree and presents, the reels include A to 10 playing cards, a gift box, Christmas pudding and holly. The top payer is smiling Santa who get you 50 times your total stake for a 5-symbol combo.

Also you have to pay extra to activate the stacked wilds which can land on any reel. The wilds also come with multipliers that can boost your payouts by 2x, 4x, 6x, 8x or 10x whenever they form part of a winning line. The 2x multiplier will set you back $1 instead of the standard 40p (playing at minimum stakes). The 10x multiplier costs $4 per spin. Christmas Cracker Bonus feature can award you with 1 of 4 special extras:

The progressive jackpot can hit at random on any spin. All the reels will turn multi-coloured and you’ll be awarded a potentially life-changing sum if you hit it.

Now enjoy all these awesome five pokies in this new year which surely will bring happiness and joy in your life. Happy New Year!