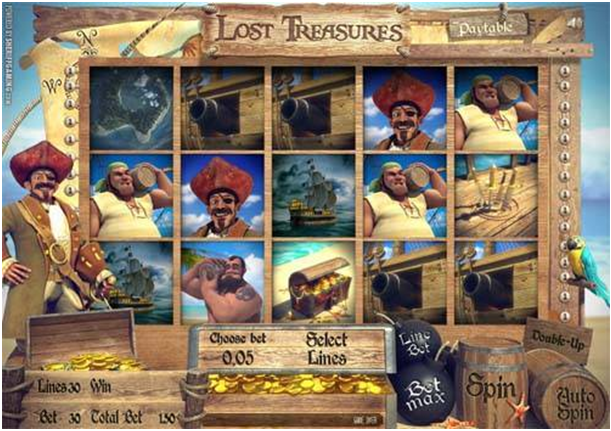 The Lost Treasures pokies is a fully animated 3D video pokies game powered by Blue Gem software. The game has a pirate theme and features images of pirate ships, treasure chests, desert islands and of course the pirates themselves.

The backdrop to the game is view from the beach looking out at the ocean. The reels are housed in a large driftwood structure. To the left of the reels, a one-eye pirate looks on while a small green parrot sits to the right of the reels. The game features high quality 3D graphics and animation with a high-energy adventure soundtrack accompanying each spin.

About this 5 Reel Animated Pirate Pokies

The Lost Treasures pokies machine features 5 spinning reels with three rows and a total of 30 paylines. Before each spin, players can set the number of paylines they would like to play as well as the number of coins bet per payline. The higher the bet, the higher the payout for any line win. In terms of bonus features like rewards, the game offers stacked Wild symbols, Scatter symbols, free spins and a bonus game.

The Scatter symbol in the Lost Treasures pokies is the treasure map symbol. Finding three or more treasure map symbols anywhere on the five reels will trigger the interactive bonus game. In this bonus round, players must help the captain find hidden treasures on the map. By clicking on certain areas of the map, players can win instant coin prizes or free spins with added multipliers.

Pick Me Bonus and Double Up Feature

The final bonus feature to look out for is the double up feature. This is Blue Gem’s version of the classic gamble feature found on most pokies games. After any standard line win, players can click on the double up button at the bottom of the screen. In this bonus game, the pirate captain will flip a coins. If players correctly guess whether the coin will land on heads or tails, they will double their line win. An incorrect guess will result in a loss of the line win.

Either pick your mobile smartphone or sit in front of PC to join any friendly online casino to play real money pokies with real AUD.