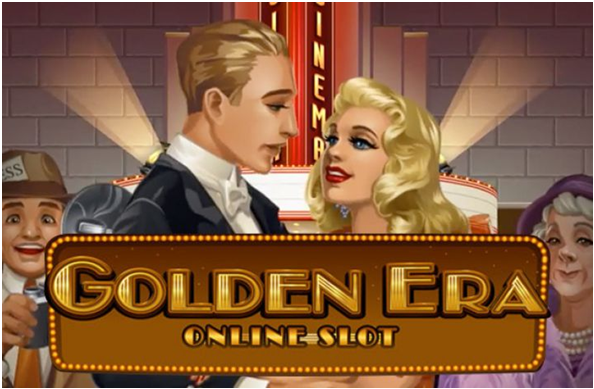 Golden Era pokies is powered by Microgaming and features fifteen fixed paylines that play out over five reels with three rows. The theme draws its inspiration from Tinseltown’s golden age, which spans across the late 1920’s up until the early 1960’s.

This pokies machine is all about show business and Hollywood glamorous theme. The game itself is set during the 1940’s, during the heyday of Old Hollywood and is complemented by well-crafted visuals and reel symbols, as well as a catchy soundtrack.

Players of Golden Era will rub shoulders with the rich and famous of yesteryear, as they encounter a VIP cast of glamourous actresses and suave actors on the reels.

The reel symbols featured on Golden Era wonderfully mirror and complement the overall theme of the game. Symbols include a film reel, cinema tickets, an award trophy, a classic luxury car, film camera and even a pair of hands set in concrete, similar to the iconic Walk of Fame stars one can find on the Hollywood Boulevard in Los Angeles.

Players will also encounter a host of interesting characters from that era, depicted on the reels as symbols. These include a suave young actor, a beautiful actress resplendent with luscious fur shawl and diamond necklace, a glamourous older actress drinking champagne and a press photographer.

The wild symbol is represented by the Golden Era logo and will replace all the other symbols on the reels with the exception of the scatter symbols. The wild symbols help players achieve winning combinations and landing five of these symbols on an active payline will pay up to 500 times the total line bet.

The scatter symbol is depicted by a black and white movie clapper board at the Australian mobile casino sites. If three or more movie clapper board symbols appear anywhere on the reels, the bonus feature will be triggered. Players will be asked to choose between the Free Spins or Double Feature bonus.

Should you opt for the Free Spins Bonus feature with Embracing Wilds, you will receive twelve free spins. On the first spin, the suave actor and beautiful actress will each turn reels one and five respectively, turning them wild as they move closer towards the middle of the screen. They eventually land in a wild embrace as they meet up on the third reel. All winning combinations accumulated during the Embracing Wild will be multiplied by two. This novel sequence will repeat itself for a maximum of four times until all the spins are complete. Players should be aware that it is not possible to retrigger any additional spins from this point.

The Double Feature Bonus is the similar to the Free Spins Bonus, as it can only be activated when three or more scatter symbols appear on the screen. Players will be presented with a selection of ten classic movie posters from which to choose from.

Each poster depicts a popular cinematic genre which includes categories such as romance, western, horror and sci-fi. Simply pick a poster to reveal a mystery prize. If you’re lucky, you’ll either walk away with a cash prize or find a multiplier which will double all bonus wins. If the poster you select reveals a red “Pop” icon, the bonus round will draw swiftly to an end and you’ll be returned to the main game.

Golden Era online real money pokies can be played at any Microgaming powered online casino with real AUD or BTC.