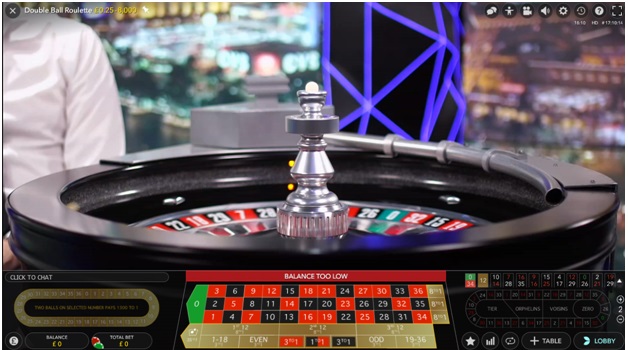 Double Ball roulette game is brought to you by Evolution gaming at online casinos. This game is similar to any standard roulette game with the difference that it is played with two balls. At real casinos the game uses compressed air to shoot the two balls out of a tube almost simultaneously. They travel at the same speed so the second ball always trails the first one.

At online casinos two balls deliver two winning numbers from a single spin. At the push of a button the live dealer sends the two balls shooting from a special patented device. There are new and exciting betting opportunities and more frequent payouts of up to 1,300 to 1.

As the name suggests, this table is played using two roulette balls that are dropped simultaneously onto a European roulette wheel. The game is streamed live, and a live croupier is present at the table at all times. Once betting is completed, the dealer sets the wheel in motion and shoots the two balls onto it using a one-of-a-kind contraption attached to the wheel. The only new rules you’ll have to learn are the unique betting limits and types for Double Ball Roulette.

As said above there are inside bets, where you place bets directly onto the numbers, and outside bets, where you place bets on grouped sections of numbers. In Double Ball Roulette, you win an inside bet — such as a corner bet, split bet, or single number bet — if either of the two balls lands on your number.m However, to win an outside bet, both balls must land in the right spot. Like if you bet on black, you only win if both balls land on that color.

Due to the higher chance of placing a winning bet, payouts are adjusted for the game.

Double Ball Roulette table offers two unique types of wagers called gold bets. One of these gold bets pays 35:1 and requires the two balls to land on the same number. The second gold bet requires both balls to land on the same number, a number that you’ve selected. The latter pays a massive 1,300:1, which means that with a high enough bet, this table has crorepati potential!

Though the inclusion of two balls doesn’t change the odds of a single ball landing in a certain slot, you’re twice as likely to win an inside bet in this game. This means you can place a variety of conservative and aggressive bets and have a good chance of winning at least one of your bets per round.

For the large part, the table layout is the same as that of conventional roulette games. Casino enthusiasts who have some experience in playing roulette will immediately notice that the betting layout features three rows, each of which features 12 numbers. If the chosen variation allows for call bets, gambling enthusiasts will see that the racetrack is positioned right above the numbered grid.

Since two balls are in play, the odds are modified to reflect that. The player has twice higher chances of winning with an inside bet but the payout will be smaller than that in standard roulette games. Inside Straight Up bets on individual numbers win if either of the two balls lands in the slot of the chosen number.

Players are allowed to place two individual-number bets. For example, gambling enthusiasts can bet on single 14 and single 30. If both numbers come up, the players will win both bets. The reason why Double Ball Roulette enjoys such a tremendous popularity among roulette fans is that the chances of winning with inside bets are twice as big. Yet, players should not forget that the payouts will be reduced.

Things are a bit different when one places an outside bet, though. Both balls should win the bet in order for the player to collect a payout. For instance, if gambling aficionados bet on black, the wager would be successful only if both balls land in a black pocket. Since this rule diminishes players’ chances of success with outside bets, the payout for such wagers is higher. It is also possible to bet on both red and black colours.

There is also the option to bet on both balls landing on the same individual number. If one such bet is successful, the player will collect the substantial Double Ball jackpot.

Following are the types of bets in Double Ball Roulette

There is the option to place a Straight Up bet on an individual number, including 0 and 00. In this case, the chips are placed within the betting box containing the preferred number. If either ball lands on your number of choice, your payout will be 17 to 1. If both balls land on your preferred number, you will be paid out at a rate of 34 to 1.

It is more difficult to win with outside bets because both balls should land on winning pockets. Bets on Red/Black, Odd/Even and High/Low pay out 3 to 1 if the two balls end up in one of the 18 winning pockets.

There are three additional bets in Double Ball Roulette. For example, players are allowed to bet on both Black and Red. If one ball settles in a red pocket and the second ball ends up in a black pocket, the bet will pay 1 to 1, or even money.

Finally, there is the option to place the so-called Double Ball Jackpot bet on an individual number, including 0 and 00. You win if both balls land on the number you have chosen. The payout for this type of bet is quite impressive as it stands at 1,200 to 1.

Another special wager gambling enthusiasts might be permitted to place while playing Double Ball Roulette is the Any Seven Number. In essence, this wager type bears much resemblance with the Double Ball Jackpot bet due to the fact that such wagers are settled as winning ones, provided that both balls end up in one and the same pocket.

In the event that the chosen Double Ball Roulette game is an European-style, gambling enthusiasts will also be permitted to place French or announced bets. What is worth mentioning about these wagers is that they cover specific sections of the wheel, instead of covering a set of numbers or just one number.

While playing Double Ball Roulette, players can make a Neighbour bet that provides a payoff of 18:1 and requires a minimum of 5 chips in order to be wrapped up.

What is important to note about the above-mentioned wager types is that they will be unavailable if the Double Ball Roulette game you have chosen features a double-zero pocket.

Last but not least, it is important to mention that in land-based venues the dealers do not launch the two balls into the wheel. Players are provided with special remote controls which enable them to trigger the compressed-air gun that shoots the balls onto the wheel.