Find Out if Spin It Rich Can Make a Comeback 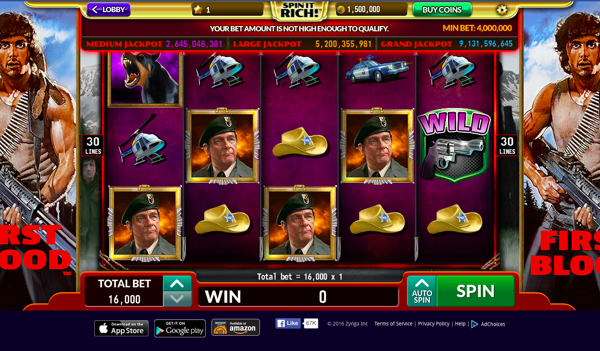 Out of all the groundbreaking releases by Zynga, Spin It Rich has managed to fly under the radar. While their other creations received international praise, this one is considered to be highly underrated. Despite not getting the attention it deserves, many fans swear that this is one of Zynga’s best releases. It features plenty of games that feature big name movie titles, which promises vibrant entertainment.

Since Spin It Rich is made by Zynga, we couldn’t ignore this game. This legendary developer has created enough classics to single handedly revolutionize the industry. For this reason it’s hard to believe that they could create something that wasn’t a game changer. We decided to investigate further, it would be a shame if this game was getting unjustly ignored. Get ready to explore one of the most mysterious slot games on Facebook! 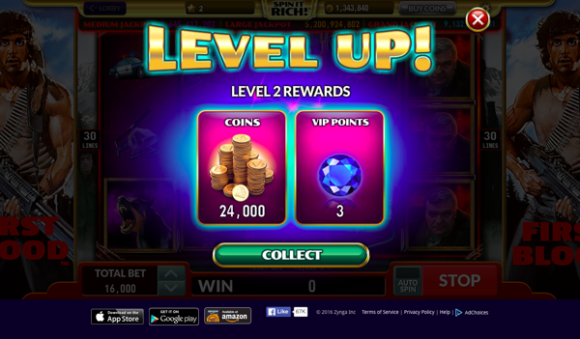 I was off to a good start!

As soon as I entered the lobby I was greeted by a slew of blockbuster hits. There were four games to choose from, but the two that caught my eye were Willy Wonka & Rambo. After some hefty deliberation, I decided to live dangerously by choosing Rambo. Armed with 1,500,000 coins, I was ready to take on the enemy. The game was full of familiar characters, so it was easy to get into the game. Motorcycles, army knives & guns filled the screen. The first spins were uneventful, but after a while I leveled up! This won me 24,000 coins & 3 VIP points. 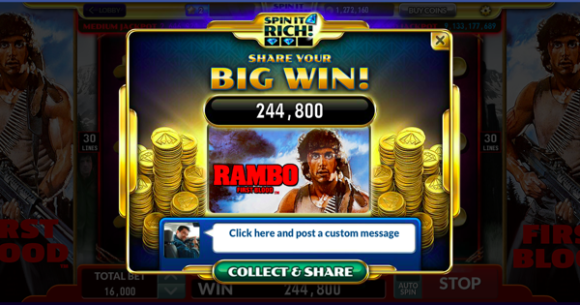 The free spins paid off!

Emboldened by this victory, I continued spinning. After a few attempts, a rocket launcher blew up the screen. This brought the reels into a dark cave. Apparently I had won 7 free spins! This feat was followed by 8 more free spins. In total these bonuses ended up netting me 244,800 coins! 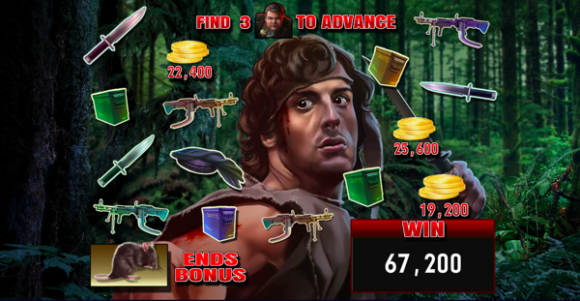 This bonus game was full of surprises…

This epic victory was followed by another big win. Before I completed 3 spins, I had already netted another 240,00 coins! This put me back in the game. Before I could raise up my max bet, I was thrown head first into an interesting bonus game. I was told to find Colonel Trautman amidst a massive array of weapons. After picking rapidly, I ended up finding him & winning 212,800 coins! 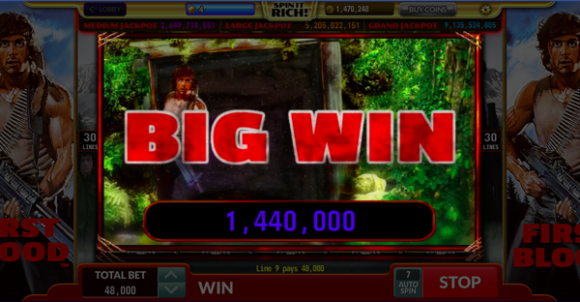 This magnificent win was too good to be true!

These bonus games were fun, but I was ready to get back to the slots. I raised up my max bet to 32,000 & got to work. After a few spins, I leveled up! This allowed me to increase my bets, so I took advantage of this new feature. After multiple 48,000 coin spins, I ended up leveling up again. I continued spinning furiously until I was greeted with yet another impressive victory. I ended up winning 1,440,000 coins! This spectacular feat was unbeatable, so I decided to quit the game while I was ahead.

Spin It Rich is exactly what we expected from Zynga. It has a slew of big name movie slots, & each one is absolutely packed with surprises. Between the bonus games & random wins, this game doesn’t disappoint. It may not have the same quality graphics as Zynga’s newest releases, but this game is still amazing. It’s a shame that this game hasn’t gotten more recognition!