Home / Pokies / Revisit a Classic with Dead on Arrival II

Revisit a Classic with Dead on Arrival II 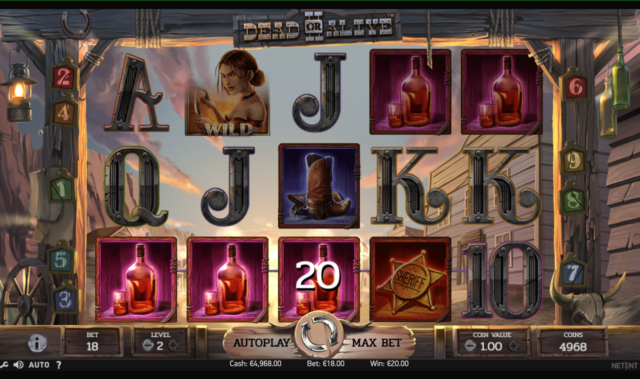 Out of all the highly anticipated sequels of 2019, none shook up the casino industry more than Dead on Arrival II. When NetEnt first released its predecessor in 2009, DOA was hailed as the best game of the year. The internet became flooded with videos of players winning 2,000x their bet or more. Combined with its contagious storyline and vibrant graphics, Dead on Arrival became the standard for video slots games. After immersing fans in nearly a decade of suspense, NetEnt is plunging punters back into this lucrative Western adventure.

The Dead or Alive series is officially back with a vengeance, and it’s already accumulating rave reviews. Boasting a fun storyline and plenty of familiar wilds, Dead or Alive II is ready to simultaneously treat longtime fans and new players. NetEnt added a feature where punters can win up to 100,000x their bet, and this welcome addition raises the stakes to epic levels. This 5-reel slot game is equipped with 3 rows & 9 fixed pay lines. This sets the stage for 300 wild lines and a staggering amount of free spin variations.

Dead or Alive is a hard act to follow, which is why its sequel couldn’t escape criticism. No matter how many features NetEnt optimized, not everyone is ready to replace a classic. To help clear the air, we decided to showcase our experience with Dead or Alive II. This game surprised us on various levels, which is why it warranted an in-depth review. Discover whether this highly anticipated sequel lives up to the hype!

As soon as the game loaded, we were immersed into a different world. Cowboy boots, bottles of whiskey and revolvers graced the reels. This was set against a Western backdrop that made us feel like we had just stepped outside a saloon. Eager to get in on the action, we set the wagering amount to max bet and started spinning.

After a few spins, a gunshot cracked through the air. Before we knew it, a devious bandit appeared from behind one of the letters and we won 20 credits. We were betting 18 coins a spin, so this win was welcome. For the next few spins, our efforts were graced with nothing more than lackluster wins. Each time we won the bullets rang out, but it failed to keep our budget from fading away.

Ten spins later, we were no closer to reaching our goals. Every win was 20 coins or less, which paled in comparison to what we were spending. The highlight was a 30 coin win, and this wasn’t nearly enough to keep the show on the road. Determined to make up for what we were spending, we continued to dig ourselves deeper into debt.

Right when we were about to lose hope, we hit a welcome stroke of luck. All of a sudden, we received a big win of 280 points! While this was far from the 2,000x wins we had seen other players brag about, it was still a refreshing surprise. We had been spinning for so long that striking it rich seemed impossible, but now there was finally hope. Emboldened by this victory, we continued spinning for another hour. This period was filled with tiny victories and even more losses.

After enduring a long expedition through the Wild West, we returned with nothing to show for it. Despite having plenty of fun features, Dead on Arrival II fails to deliver the large jackpots we crave. It’s still a wildly entertaining romp through the West, but it has to been done strategically. Odds are you won’t hit that elusive jackpot, but it’s an intriguing idea to entertain while playing. NetEnt did a great job with the graphics, we only wish they incorporated more action in-between spins.