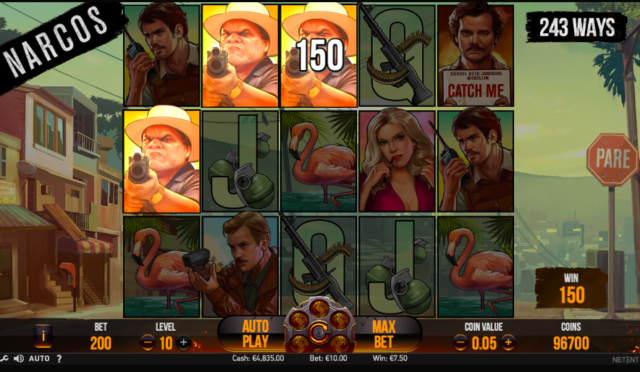 After taking Netflix by storm, Narco’s is taking the action packed legacy of Pablo Escobar to the reels. This highly anticipated release was made possible by an unexpected partnership between NetEnt and The Gaumont Film Company. Teaming up with the oldest film company in the world allowed NetEnt to fill this game with superb graphics. Despite boasting a slightly comic book-like design, Narcos Slot is bursting at the seams with familiar features. Piles of cash, guns and airplanes are flanked by the cast of this beloved show. All this is complimented by mariachi music, which produces the sensation of roaming the dusty streets of Colombia.

Even though the presentation is breathtaking, the hidden features are where this game allegedly shines. NetEnt equipped Narcos Slot with 243 ways to win and a 96.23% RTP, which gives it a medium level of volatility. These generous features are complimented by drive-by shooting bonus rounds and police badge wilds. All these are trumped by a police mugshot of Pablo Escobar that acts as the game’s special Locked Up symbol. This unlocks three free spins with golden cases filled with coins, extra spins and win multipliers.

Despite boasting a slew of enticing features, there’s only one way to see if Narcos Slots lives up to the hype. To truly decipher what NetEnt created, we dove headfirst into the game. What we discovered was shocking, since this game managed to surprise us on various levels. Take a look at this in-depth review to see if this contraband-filled pokies theme is right for you!

As soon as the intro ended, we were plunged into a different world. A slight breeze blew a newspaper through the abandoned streets of Medellin. Flamingos, grenades, and mounds of bills were flanked by armed police in a showdown with cartel hitman. Out of all these tantalizing images, one managed to stand out. The elusive Pablo Escobar mugshot with a defiant Catch Me message scribbled on it stole the show. As the mariachi music played in the background, we started spinning for our piece of Pablo’s fortune.

In the spirit of indulgence, we raised the betting level to as high as it could go. This upped the ante to 200 coins per spin, but NetEnt gave us plenty of room to invest. We were armed with 100,000 coins, so the only viable choice was to push this game to the limit. After spinning close to ten times, we finally hit the police badge wild. This only generated 100 coins, which was a measly payback after investing 1,500 credits.

Unfazed by this stingy payout, we continued spinning with renewed vigor. For the next few spins, our efforts were rewarded by tiny jackpots that ranged from 50 to 100 coins. Right when we were about to lose hope, we hit two 350 credit jackpots back to back. Even though these were far from massive victories, it felt good to at least break even on a couple spins.

Once we discovered that the coin value could be adjusted, things went downhill fast. The coins were spent at an alarming rate, but no wins allowed us to replenish our budget. Before long, the game was alerting us that we were completely out of cash. After staring at the screen for a minute in disbelief, we exited the game feeling slightly cheated. We had blown through $5,000 in fake cash within minutes, and it was a godsend the stakes weren’t real.

Despite having a vibrant theme, Narcos Slot fails to deliver the goods. Just like the infamous drug that made this series possible, this game leads punters into a deadly trap. While it’s easy to get lured in by the gritty features, seeing your money drain at alarming rates is impossible to ignore. Being fans of the show, every part of us wanted to love Narcos Slot. Unfortunately, there aren’t enough wins to justify investing in this nefarious game. NetEnt did a great job on the visuals, but they should have packed it with more jackpots to keep users onboard.