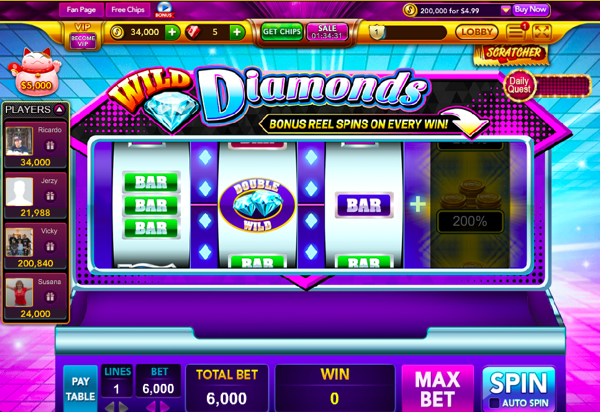 Out of all the newcomers on Facebook, Casino Saga is quickly rising to the top. They are rapidly gaining followers with their surprisingly diverse array of games. From slot machines to Baccarat, this game offers everything enjoyed at most casinos. They also provide three ways to play Texas Hold’em Poker: cash games, MTT tournaments and Sit n Go. There are also four types of slot machine tournaments with progressive jackpots that go live every day. New slots games are added every week, and players can earn bonuses just by playing with their friends.

Users also claim that the graphics are phenomenal, which is impressive given the staggering amount of games offered. All these claims have made Casino Saga too enticing too ignore. We decided to see if the game lived up to hype by experiencing it for ourselves. After playing it for an hour, we were able to create the most in-depth review online. Prepare to see what Casino Saga really has to offer! 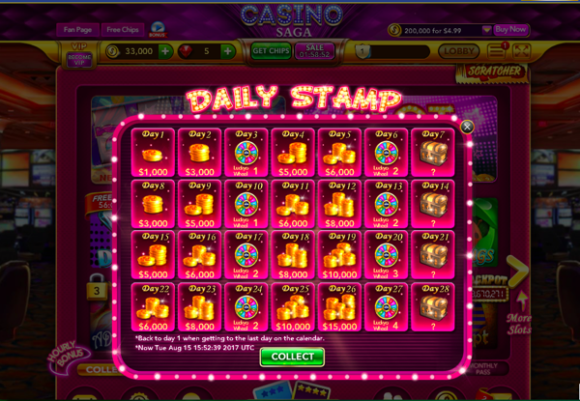 This was an interesting reward system.

Before I could reach the lobby, I was told to spin the wheel. This daily spin won me $13,000, but the surprises weren’t over yet. After accepting my prize, I was thrown into another bonus round. This time I was confronted with a massive stamp sheet, which offered prizes for every day I played. Since it was my first day, I only won $1,000. But the prizes got noticeably more exciting as the days progressed. 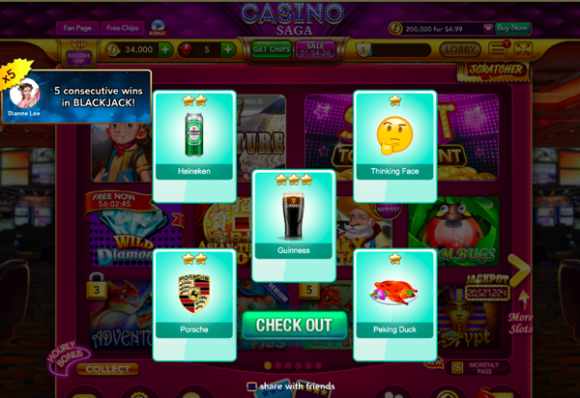 This card game was perplexing since it offered no prizes.

Desperately trying to make it to the lobby, I clicked out of the ads and offers to join random rooms. This proved to be a daunting task, since I was offered something too tempting to resist. I was invited to start collecting the Live, Laugh, Love welcome package. Curious to see what this was, I eagerly accepted the prize. This threw me into a card game with five flipped over cards. Every time I flipped over one I was met with a bizarre mixture of emojis and beer brands. These symbols accrued in a scrap book, but didn’t win me any prizes. 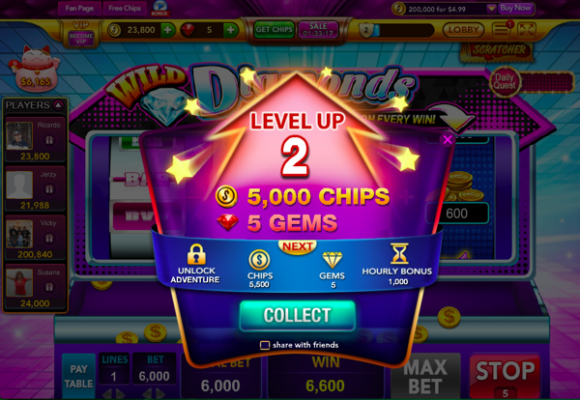 This level up didn’t give me enough coins to keep playing.

The novelty of these bonus games was wearing off, so I was relieved when I finally reached the lobby. Faced with six slot options, I ended up picking Wild Diamonds. This was a retro themed three-wheel game with a futuristic touch. Unbeknownst to me, I only had 28,000 coins. This would have been fine if the minimum bet wasn’t 6,000. Faced with my coins disappearing like a magic trick, my only choice was to hope for the best. A few times I won 7,000 chips, and then I leveled up! This won me 5,000 chips, so I entered the game in suspense. 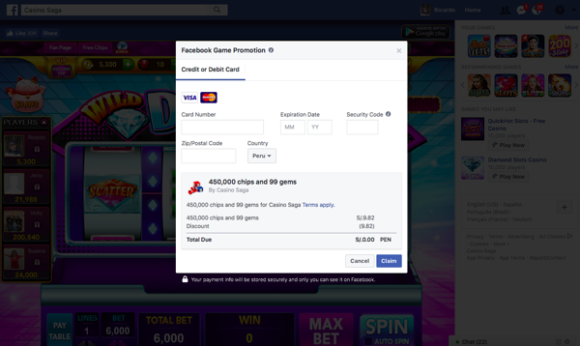 There was no way I was giving them my credit card information.

After multiple uneventful spins, I was informed that I was out of coins. Casino Saga didn’t hesitate to offer me 450,000 coins. This time it was free, but the next time it would cost $11.99. Perplexed by this bizarre business approach, I attempted to collect the coins. From there Casino Saga tried to retrieve my debit card information. This was unacceptable, so I quit the game and ignored this nefarious offer.

Casino Saga has great graphics and a slew of interesting games, but it’s nearly impossible to play for free. They try to rope you into giving them your credit card information, which is an instant red flag. Obviously they are catering to people with no self-control who won’t argue once the “free” deal starts charging their card. I am extremely disappointed with them, since this game was bursting at the seams with potential. Do yourself a favor and play games that are actually free, since you can’t complain after handing someone private info.