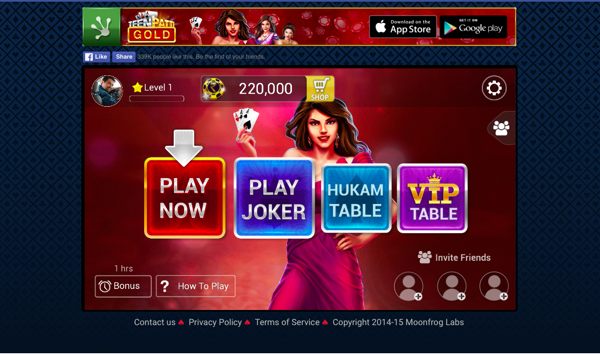 Immediately upon joining you are greeted by a voluptuous woman with 4 options. You can choose to play regular poker, Joker, Hukam Table & the VIP Table. Armed with the $200,000 welcome bonus, I decided to go wild by playing Joker. 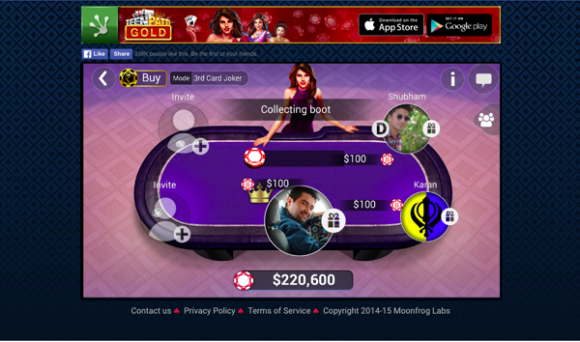 More players make the game that much more interesting!

Once you reach the table, you are instantly pitted against a bot. You also have the option to invite friends to join the game. But don’t feel bad if you don’t, because as you play you are joined by other players from around the world. 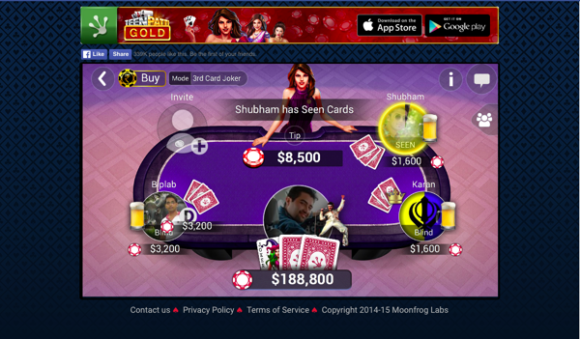 Hands down the ridiculous gifts are the best part of the game.

Once the game starts you have the option to view the cards, side show & pack. If you feel you have what it takes, you can take things to the next level by adding more money on the table. You can also mess with other players by gifting them donkeys, crying baby faces or beer bottles. You can also gift other players grenades, elvis memes & other fun additions. 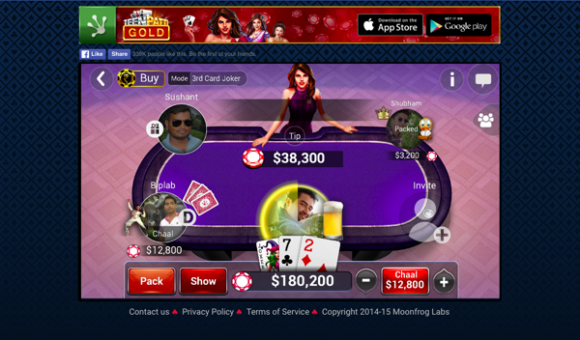 Things were getting out of hand…

As I started playing more & more players started joining. They seemed to be predominately from India. While that wasn’t a problem, their intimidating level of experience was. After a few wins & plenty of losses, the game turned into a nasty battle of rambunctious gifts. Crying babies & braying jackasses where being tossed around like hot cakes. 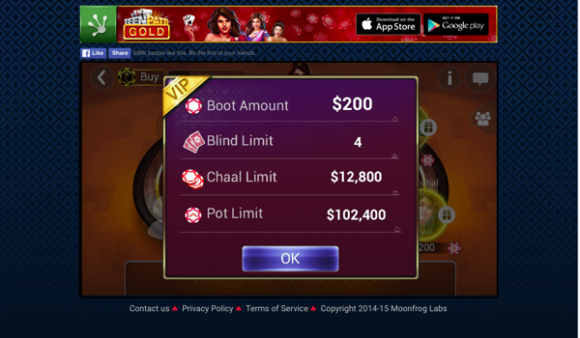 The rules had changed…

Fortunately the time ran out before things got more out of hand. By the end of the game I had one an additional $8,700 in chips. Seeing that I had lost many times that amount during the course of the game, I decided to go big. After joining the VIP table I was instructed that rules had changed. We now had a $200 boot amount, a blind limit of 4, a Chaal limit of $12,800 & a pot limit of $102,400. Slightly daunted by these new numbers, I jumped head first into the game. 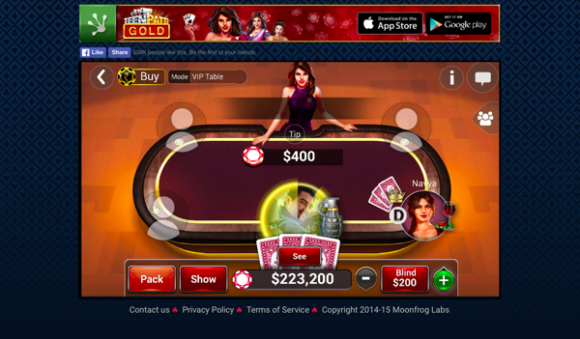 We spent more time giving each other outrageous gifts than playing the game.

If I was expecting things to be more civilized at the VIP table, I was horribly mistaken. Tomotoes, crying baby memes, jackasses & even grenades were being thrown around like it was going out of style. I had unintentionally walked into a war zone. All decency had gone out the window, & our emotions had officially taken control of the game.

After a ridiculous amount of trash talking with inappropriate gifts, I decided to call it a game. I had won & lost plenty of times. Even thought the rivalry was fun, it was time to move on with my life.

Teen Patti Gold is a poker game that’s extremely fun to play. You are pitted against real life players who will do anything to win. Luckily you have a huge array of random “gifts” in your arsenal to insult other players with. You will find that you will be focusing more on trash talking than on playing any type of table game. But that was fine with me. The insanely fun dynamic of this game made up for any complaints I had about the quality of the graphics. Overall this is an awesome game to play!