VM Casino – Slots Has a Long Way to Go 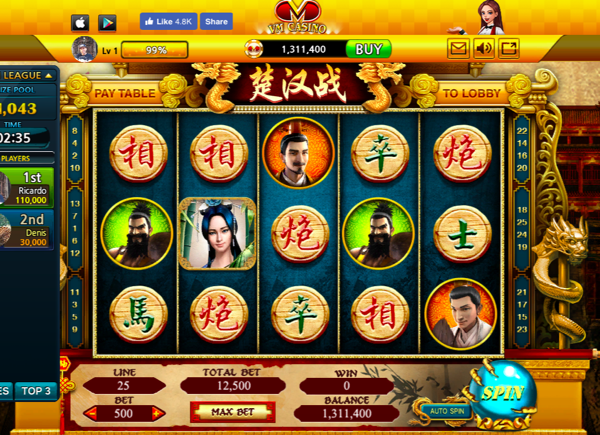 Out of all the new casino games on Facebook, none are stealing the show like VM Casino – Slots. This release has taken the internet by storm with its delightful combination of vibrant levels and unusually high credits. Players are instantly thrown into an impressive series of levels with multiple double ups. VM Casino – Slots has repeatedly seduced players with exciting gameplay and ample bonus rounds. This has proved to be a winning combination, since they have 10,000 loyal players and numerous page likes.

The fanfare for this pokies game was so unexpected that it became impossible to ignore. Faced with repeated recommendations, we had to see if this release lives up to the hype. We sent our top editors to investigate, and what they found was shocking. Enjoy the most comprehensive review of VM Casino – Slots, it completely surprised us! 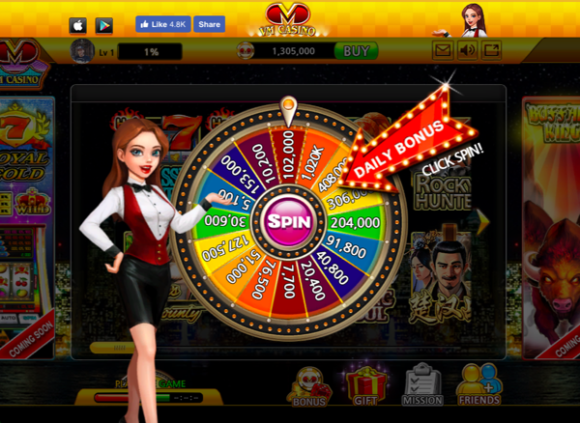 This game was off to an exciting start!

As soon as the game loaded, I was greeted with a giant birthday cake. This creative display announced that I was receiving 300,000 credits to explore the game. Anxious to start spinning, I hastily accepted this generous offer. This brought my total amount of coins up to 1,300,000, which was more than enough to dive into the game. Before I could hit the lobby, I was instructed to spin the wheel. This won me 21,400 coins, which was nice but I was chomping at the bit to get to the slots. 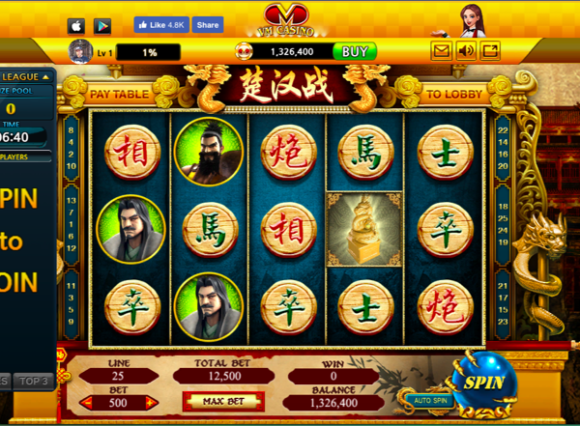 This level was packed with interesting characters.

After being bombarded with level instructions and offers to buy chips, I was finally in the lobby. There were a slew of choices, but in the end I chose a game with ineligible Chinese symbols. Even though the name seemed exotic, the level was even more foreign. It was completely filled with wooden chips with Chinese symbols and shady men with beards. This bizarre combination instantly won me over. Flanked by multiple dragons, I started spinning furiously. 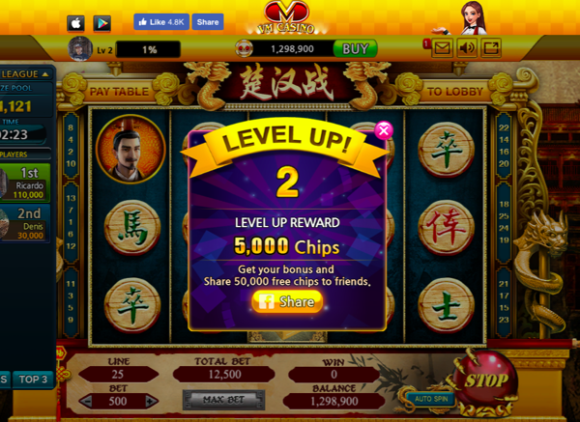 This win was the last I could achieve on this level.

The first few spins were uneventful, so I decided to raise my minimum bet. Unfortunately this wasn’t an option, so I kept spinning until I hit 5 of a kind and won 50,000 credits. Emboldened by this victory, I kept spinning. Just when I was starting to get bored, I ended up leveling up! This won me a measly 5,000 credits, but it also almost broke my computer. For some reason the game became unresponsive after this victory. The time was still counting down on the side, but I was unable to keep spinning. 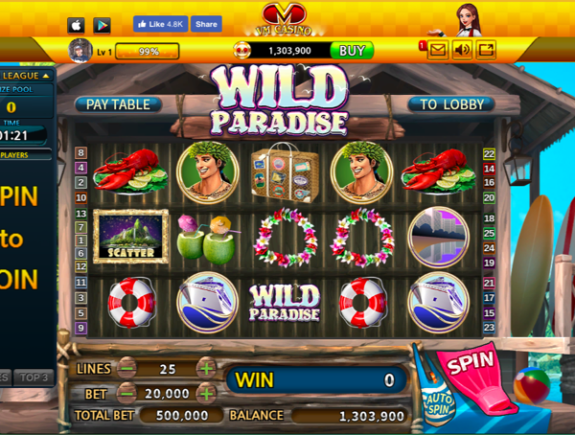 It was time to up the ante.

Trying to give the game a second chance, I reloaded my browser. I was quickly ushered into the lobby, so this time I chose Wild Paradise. The icon sported a bikini clad woman and a cruise ship, so I hoped for the best. After a long wait, the game finally loaded. This theme was filled with vacation stereotypes, but it still possessed a certain charm. It also allowed me to raise the max bet, so I changed it to 500,000 credits a spin. 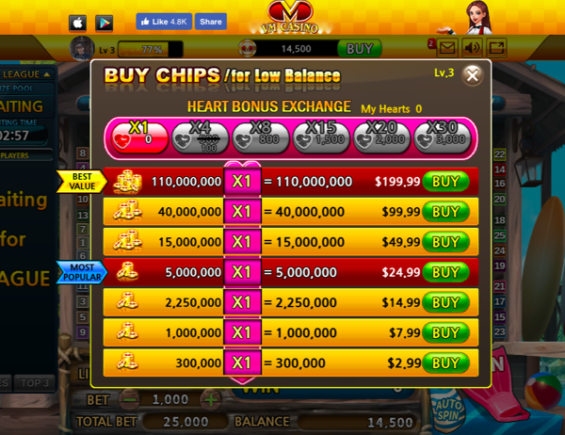 There was no way I was going to buy credits.

Armed with this new amount, I spin until it was no longer possible. This only lasted two spins, so I was forced to lower my bet to 187,000 credits a pop. On the bright side I did reach level three, but this only won me 5,800 credits. Hoping for the best, I continued spinning until I had to lower my bet again. My funds were dwindling rapidly, so I continued lowering my expectations. Unfortunately this wasn’t a maintainable habit, and before long I was informed that I had to purchase chips. Faced with this reality, I quickly quit the game.

VM Casino – Slots has a long way to go if they want to survive. While the first game was filled with glitches, the second one I tried worked great. Unfortunately, there wasn’t enough action to keep me playing. On top of having lackluster wins, there were absolutely no bonus games. The most exciting part was quitting the game, since I was able to finally access better options. There are plenty of viable choices when it comes to pokies games on Facebook, but this isn’t one of them.