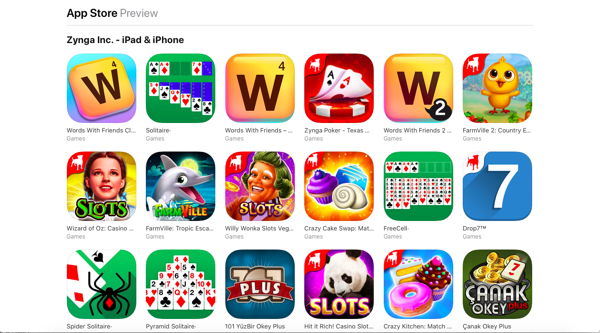 Even though it’s one of the most iconic parts of iOS, iTunes’ relationship with casino apps remains shrouded in mystery. Despite originally catering exclusively to music, this media player has come a long way since its 2001 debut. By 2005, Apple had already started diversifying iTunes from music by adding podcasts & eBooks. Within 3 years, Apple introduced native mobile apps for its operating system, and iTunes on computers received a dedicated section for apps. As their catalogue of programs expanded, casino apps started stealing the show. Today close to a thousand different casino apps have been downloaded millions of times in iTunes.

Out of all the casino developers who made an impact on iTunes, none were more iconic than Zynga. After FarmVille took social gaming by storm in 2009, they utilized their massive popularity to develop classic casino games. Even though their most successful app was Zynga Poker, their pokies releases are too impressive to ignore. When these apps reached iTunes, they managed to dominate their download list & become household names.

To showcase Zynga’s legacy, we compiled a list of their most popular pokies apps on iTunes. Through vibrant graphics and fun storylines, these releases managed to captivate an entire generation. Each game generated millions of downloads and continue to generate rave reviews to this day. These slots games are in a league of their own, so discover which Zynga apps pioneered slots on iTunes!

Pokies Theme #3: Hit it Rich! Casino Slots Game – By combining all of Zynga’s most treasured releases, this app embodies Zynga’s impact on social gaming. Users start with 10 million free coins, which gives them plenty of room to explore this epic selection of games. While many of the releases revolve around popular casino themes, many bring blockbuster classics to the reels. The Terminator is complimented by Ghostbusters, Ted, Willy Wonka & the Chocolate Factory and The Princess Bride. These games are some of the best social casino games available, so come get a dose of quality slots!

Pokies Theme #2: The Wizard of Oz – This game manages to effortlessly blend one of the most iconic movies of the 20thcentury into the reels. Through epic graphics and familiar movie references, Zynga managed to immerse punters into the storyline. Players get to accompany Dorothy, Tin Man, Scarecrow and the Cowardly Lion on a breathtaking adventure down the Yellow Brick Road. This journey is packed with massive jackpots and millions of free slot credits, which makes it impossible not to get in the game. There’s no excuse not to celebrate this classic film’s transition, so discover why it still ranks high in iTunes!

Pokies Theme #1: Game of Thrones Slots Casino – As this show continues to break records, Zynga has transferred its golden storyline onto iTunes. This immersive slot theme boasts an eye-opening mixture of familiar characters and Vegas-style pokies options. Throughout the game, users can add Jon Snow, Tyrion Lannister and Arya Stark to their collection. This impressive amount of characters is complimented by jackpots styled after the show. Mother of Dragons and the Iron Throne are just a few of the possible victories, so dive into Zynga’s newest hit!