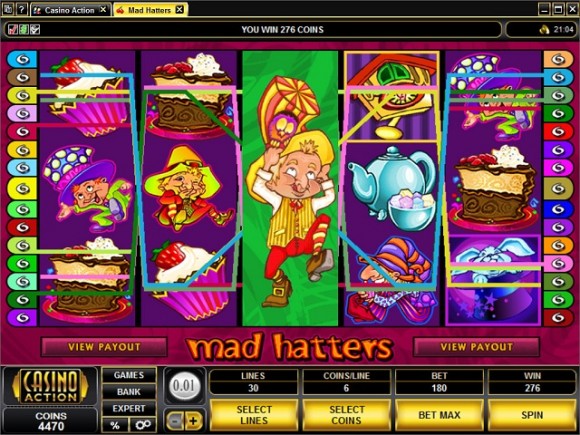 If you really want to laugh and experience some real fun with comedy characters in your gaming session then play Mad Hatters pokies game. Developed by Microgaming with 5 reels and 30 paylines, you will find this game a total comedy of madness with silly graphics and the sound that echoes on every spin.

At Mad Hatters pokies you can come and meet the hilarious and smart mad characters. Story revolves around Mad Hatter, one of the characters from Alice’s Adventures in Wonderland and two of his close friends, who are staging a highly entertaining tea party, where you will be able to taste a number of delicious sweets.

You will find yourself lost in these characters and to the excitement fall down in the rabbit hole,  put on some charming top colorful red and purple hats, have tea cups, cuckoo clocks ringing now and then and above all the party guests with all fun and excitement going on.

Mad Hatters – Play at the casino

You can easily play Mad Hatters at any online casino of repute. Also you can play with your mobile devices be it smartphone, iPhone or iPad. All you have to do is just get registered at the casino and start playing.

Mad Hatters is a non-progressive game and you can stand to win a huge $50,000 payout and you also have the ability to control their bet. Altering the various coin denominations before spinning the reels can do this. You will love this game at all times at the casinos.

Mad Hatters game features free spins, multipliers, a Cuckoo bonus round and symbols such as scatters and wilds which could help you increase your winnings. Mad hat, cuckoo clock, cake, tea and rabbit complete the list of symbols populating the reels and are the ones who hold the key for the big wins. Mad Hatters game is played at fixed 30 paylines, coin value ranges from $0.01 to $0.10, whereas the total bet can be further increased by staking between 1 and 10 coins per single payline or up to 300 in total.

The Mad Hat an unusual object displays colourful and huge. It’s a wild symbol. Put it down on the reels and it will help you to create more winning combos. This magical hat can replace other symbols expanding wild with many crazy prizes.

You will see the Benny Bunny Rabbit of the Mad Hatters always in a hurry that scatter in haste on your screen to bring you more winnings. He appears anywhere and pays out in any position. Manage to catch 3, 4 or 5 scattered Bunnies and you will get a magic boost of 5x, 50x or 300x Multiplier for your total bet!

This pokies supports bets from $0.01 to $75 per spin. The free spins feature gets you rewarded with a chance to win up to 50 free games with an additional extra wild and even an expanding wild.

If you see three Bunnies anywhere on the reels, then it’s high time for free spins feature! The number of free games depends on the number of scatters you catch. So that 3, 4 or 5 Bunnies will bring you 10, 35 or 50 Free Spins!

You are also offered to choose one of 3 mad hatters to make him your extra wild. Going for it makes you 2x Multiplier for all winnings gained during the feature.

Playing Mad Hatters can make you win more and more and this is true for Wild symbol wins. While the three high-value icons all feature payouts in excess of 1,000 coins at bet per line of 1, five Wilds on an active payline award between 20,000 and 200,000 credits depending on your bet per line.