Hit it Rich With Gonzo’s Quest 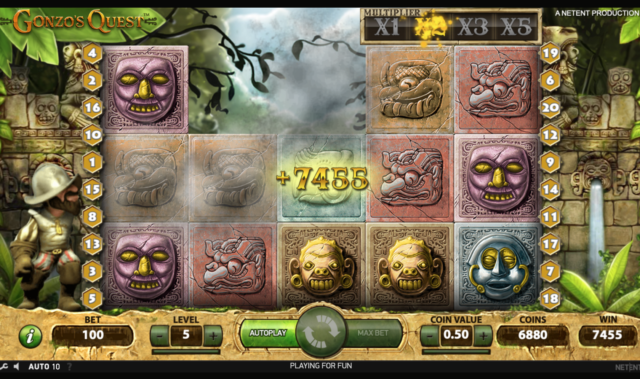 Out of NetEnt’s illustrious line of releases, no game has generated as much praise as Gonzo’s Quest. This 5-reel, 20-payline game puts users in the shoes of Gonzo, the Spanish conquistador who’s searching for Eldorado. This mythical city may be bursting at the seams with gold, but it has plenty of unwanted surprises. Fortunately, Gonzo isn’t empty handed. After stealing a treasure map, Gonzo embarks on the journey of the lifetime. Between the 3D graphics and epic story, NetEnt artfully immerses punters into this South American adventure.

When this game made its debut in 2010, it took the industry by storm. Users were enthralled by NetEnt’s artful portrayal of the Peruvian Amazon and tantalized by the larger than life wins. Various high ranking magazines and website praised the game for being just as lucrative as it was well developed. This hype fueled the popularity of Gonzo’s Quest to nearly meteroric heights. Last year NetEnt announced that this game was being developed into a VR experience, so the adventure has just begun.

Now that Gonzo’s Quest is being remastered, it’s prime time to revisit this iconic pokies release. To showcase how well this game withstood the test of time, we created the first in-depth review from 2019. The longevity of this game is undeniable, and its cunning features still hold up to this year’s competition. This game achieved a rare level of fame, so revisit an unforgettable industry classic with our jaw-dropping review!

While it may be tempting to skip the intro, this short video provides a fun introduction to the game. Users immediately get acquainted with Gonzo’s situation as he steals a treasure map from his captain. After jumping deck with this coveted prize, Gonzo swims ashore to the coast of Peru. He immediately embarks on an epic journey, and the hunt for Eldorado begins.

When the video ends, punters are able to get a dose of the real action. In the free version, NetEnt blesses users with half a million coins. The reels are filled with exotic looking native symbols that immediately evoke feelings of being in a lost world. Gonzo is on the sidelines cheering users on as they furiously spin the reels in the name of striking it rich. This infatuation with gold is enchanting, so I set the coin value at max bet and started spinning.

For the first few spins, things were moderately uneventful. I made a few 25 credit wins, but those paled in comparison with the 100 coins I was wagering every spin. Just when I was wondering what I was doing in the Peruvian jungle, I struck a 380 bonus. This was followed by a 250 credit win, so I was officially back in the game.

To my delight, the next 50 spins were filled with a welcome mixture of various sized victories and free spins. I even won a super mega win of 7,505 coins! Every time I was starting to lose, the ancient symbols fell in my favor. This consistent stream of prizes kept me glued to the game, and I nearly had to pry myself away from it.

Gonzo’s Quest is a rare breed, since it manages to live up to the hype 9 years after its release. Between the unexpected wins and hidden bonus features, this game is a treat to experience. I loved the free spins, and hitting the super mega jackpot made my night. This game deserves to transition to VR, since its theme too vibrant to be trapped in 3D forever. You can play with real money or for fun, so there’s no reason to miss out on this Peruvian adventure!